I finally sat down last week to start playing Burial at Sea Episode 2. Again. I’m starting on round three, now that I think of it, but this is it! Third time’s a charm! Definitely going to finish this time!

The reasons for my many restarts aren’t important. What matters to me is the perspective I’ve gained through this exercise in repetition. Developing a critical, objective eye is difficult. When you love a genre or series, you run this risk of letting enthusiasm blind you to its faults. Re-reading, re-watching, and re-playing all help to temper that enthusiasm with cool, dispassionate objectivity.

Burial at Sea Episode 2 is an enjoyable game, but so far, it’s not without significant flaws, one of which may be Elizabeth herself.

Before I go any further:

This series of posts includes what may be considered spoilers for BioShock Infinite and it’s DLC packs, Burial at Sea Episodes One and Two.

The game opens with a black screen and a quick, auditory recap of Bookerstock’s murder at the end of Episode One. The screech and wail of the Big Daddy’s drill reverberate into the distance and are replaced by the scratchy, vintage tones of “La Vie en Rose” playing on a phonograph. A roselit vista gradually illuminates our screen, and we find ourselves not in Rapture, but in Paris at a cafe on the Seine. As expected, we’re looking out onto this placid world through Elizabeth’s big, blue eyes.

At first glance, the surroundings are pleasant enough. We’re free to meander and enjoy the sunny, lazy afternoon . The music that originated with the phonograph seems to follow us wherever we go, prompting Elizabeth and her fellow Parisians to sing along. Everyone we meet greets us warmly, like old friends.

One place in particular captured my attention: The book store. I lingered there for a good while, strolling about the small, sunlit shop. Part of the attraction may have been that the music wasn’t quite as loud and overwhelming there. It might also have reminded me of the shops I used to visit in Ferndale, a small Victorian town near the city where I grew up. One area in this shop stood out as a masterful bit of level design. There was a window, paned with age-mottled glass, looking out on a quiet, secluded flower garden. The effect was beautiful, something like an impressionist painting. 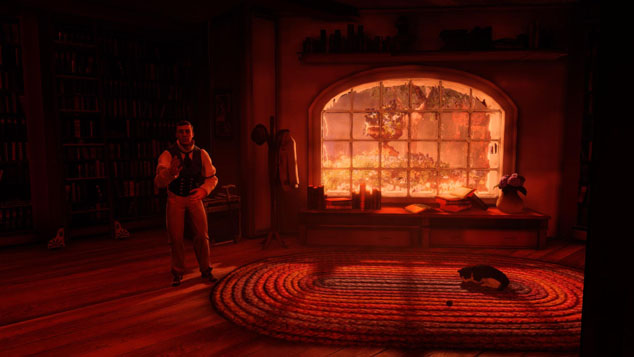 As you wander, you may begin to notice oddities amidst the idyll. Everyone is just a little too happy. Take “Bread Boy”, for example, one of the first NPC’s you meet. This giddy young lad is clearly over-fond of his baguette. He prances about, holding his beloved loaf aloft as he twirls in endless, giggling circles.

If Elizabeth’s scene in the tower library in Columbia hearkened back to Beauty and the Beast, the opening scenes of Episode 2 draw inspiration from Disney’s earlier musicals. Just when you find yourself wondering if and when the talking animals will arrive and join the gaiety, a happy little bluebird alights on your finger and proceeds to twitter and chirrup in tune with the score.

Disney himself would have blushed at the excess.

Before long, Elizabeth encounters a little girl holding a red balloon (an apparent tip of the hat to French cinema). The girl runs and Elizabeth pursues her. The moment the chase begins, Elizabeth’s mood darkens. The music stops, storm clouds gather, and we find ourselves running through the streets of a dismal, rainy, miserable city.

As we might have suspected, this isn’t the real Paris. It’s a farce based on Elizabeth’s naive, idealistic impressions garnered from a sheltered lifetime of reading. Before long, we encounter our first Little Sister (or her image, anyway), Elizabeth wakes up, and the real story begins.

This abrupt juxtaposition of a happily peopled, technicolor dreamscape against a nightmare city filled with unsanitary lobotomy shoppes certainly sets the mood as we return to Rapture. All the same, I can’t help but think it was unnecessary. At best, it’s blunt and heavy-handed.

And then there’s the problem it poses for our main character. Much ado was made in BioShock Infinite about Elizabeth’s self-sufficient nature. She needed no protection. In fact, you needed her. Back in Columbia, what would you have done without her lock picking skills, her knowledge of ciphers, and her rather unique ability to pluck medkits and ammo out of alternate timelines?

(Which, if you’ll pardon the brief aside, begs the question: What happened to the other Bookers in those other timelines where alt-Elizabeth popped out of nowhere to abscond with the supplies? Isn’t that borrowing from Peter to pay Peter?)

Elizabeth is smart. She’s young and full of energy, and she’s never had a chance to live freely, to make her own choices and take advantage of her impressive self-education.

But then, where do we find her at the outset of the game? Idly passing the time at a cafe, surrounded by people fawning over her. Look closely at the newspapers strewn throughout the level and you’ll find a picture of Elizabeth next to an article with the title, in French, “Who is this beautiful young girl?”

Maybe it’s just me, but this seems odd. Having been granted unlimited freedom after a lifetime of fearful oppression under the constant watch of a winged monster, it appears Elizabeth has conjured up an ideal life where she spends her days doing nothing much in a city where she’s popular and everyone thinks she’s pretty.

Here’s hoping the rest of the game provides a glimpse of another Elizabeth, one with a little more depth, character, and grit.

You can find full-size versions of all the photos in this post (plus a few others) on my Tumblr. Thanks for reading!