I’m going to share my secret shame. One of them, anyway.

A while back I posted on my Tumblr complaining that BioShock seemed much more difficult than the first time I played it. Ever since then—and please don’t think less of me for saying this, but…

I lowered the difficulty. I’ve been playing on “easy” mode.

You know what? I don’t care. Not even a little. I don’t play games to exercise my fine motor skills and hand-eye coordination, nor am I driven to play by any kind of desire to compete.

(Good thing, that, because otherwise I’d be perpetually frustrated and miserable.)

I’ve been playing video games of one kind or another since the 1970’s. In all that time there were probably fewer than five games I mastered in terms of raw, mechanical gameplay. Pepper II on the ColecoVision was at the top of that list. It’s the only game where I ascended to the third level of mastery, that point where you no longer have to think or make moment-to-moment tactical decisions. When I was playing that game, everything around me would fall away. There was no living room, no television. There wasn’t even a controller in my hands. There was nothing but a continuum of light and sound and movement flowing unimpeded through my mind.

My high score was in the millions. After that game, as soon as I regained consciousness, I realized I would need proof of my accomplishment. I tried taking a direct picture of the TV screen with my old Kodak 110 camera. It didn’t work.

I’ve not experienced that kind of all-consuming, transcendent gameplay since then. I can’t say I miss it. I don’t think I’m the worse for having indulged in games that way, but neither do I have any desire to go back. Doing so would feel empty and pointless. It would be a waste of precious time.

Somewhere along the way, in between Mario Bros. and Portal, between Earthworm Jim and Ico, I stopped playing games to distract, amuse, or numb myself. I started playing games that made me think, games I could connect with on deeper levels: aesthetic, emotional, philosophical, social, and moral. Of course, they still had to be entertaining to warrant my interest, but entertainment was no longer the primary factor driving me to play.

A byproduct of this change is that I feel no compulsion to “beat” a game. I want it to be reasonably challenging, but I don’t feel I’m losing anything vital if I play on a medium or low difficulty setting. The correct difficulty for me is the one that best matches my abilities (pitiful though they may be). If the level of difficulty prevents me from enjoying everything else, down it goes.

At the same time, I was a little surprised at the difference betwen “medium” and “easy” in BioShock. There’s little or no challenge left in the game. Big Daddies went from being fearsome, hulking menaces to something more akin to nervous crossing guards in tinfoil suits. You don’t have to fight them so much as give them threatening looks.

It would’ve been nice to have another difficulty setting between “medium” and “easy”, but it’s no big deal. This playthrough was meant to be a quick study in preparation for Burial at Sea Episode 2, and it’s served that purpose well enough. 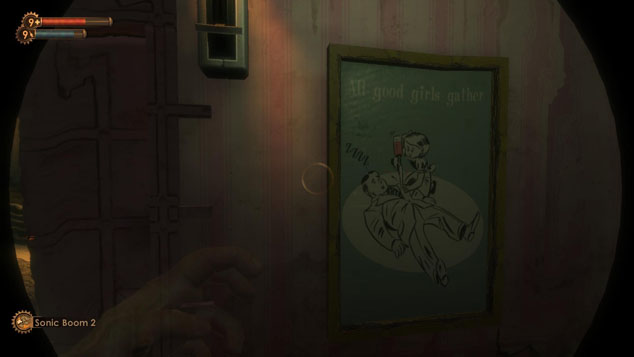 Now I’m off to find, fight, and finish Frank Fontaine! Given how easy the rest of the game has been, I don’t expect that’ll take much more than a sternly worded letter of disapproval.

Either that, or I’ll just show him a picture of that absurd “vocal chord modulator” you’re forced to use in this level & hope he faints.

4 thoughts on “Rapture Revisited Part 9: The Shame of “Easy Mode””