The last thing I expected from my first BioShock playthrough was an exploration of objectivism. But that’s also part of what made it such a thoroughly enjoyable experience. Few games have so deftly mixed violent action sequences with philosophical exposition. 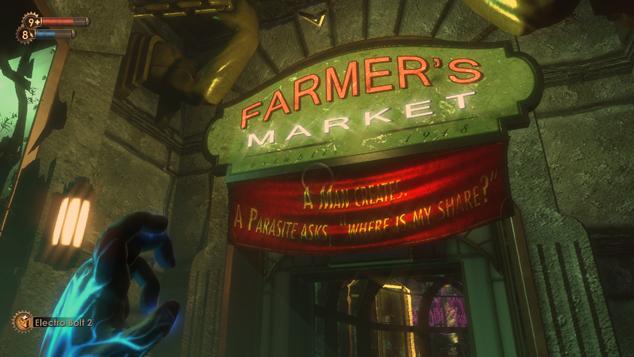 Case in point: Before leaving this level, I took a quiet moment of splicer-free “me time” and listened to Andrew Ryan’s recorded speech on “The Great Chain of Industry”.

Now, I’m not an objectivist. I don’t recognize the virtue of selfishness. Regardless of that, I enjoyed this moment. Whether or not I bought into the philosophy wasn’t the point. It was good writing, an impressively concise summary of Andrew Ryan’s personal philosophy and vision for society in Rapture.

While BioShock uses objectivism to define a key character, it doesn’t beat you over the head with its ideals. Back when I finished my original playthrough of BioShock, I couldn’t tell what the game’s authors believed. Were they objectivists pointing out the societal follies that limit our progress, or was the game one long, anti-objectivist tirade?

The fact that I couldn’t tell was admirable. It suggested openness and trust between the game’s creators and their audience. I found an interview with Ken Levine, BioShock’s writer and creative director, where he addresses this point directly:

“Here’s my favorite thing in the world about BioShock:

I was on the forums; I think it was Slashdot or something that someone pointed me toward. There was one guy saying, ‘This asshole! This communist asshole! He’s taking down objectivism!’ There was another saying, ‘I don’t want to play a game that’s some sort of Republican screed about free-market bullshit!’ I really love the fact that two people can look at the game and take away two totally different opinions on it.

The game is not about answering questions and coming up with solutions; it’s about asking questions. When you start the game and ride down the bathysphere and you see Ryan’s short film asking, ‘Is man not entitled to the sweat of his brow?’ That’s a hard question to say no to. And, I dig it. But then there’s Rapture, and I like that sort of opaqueness in storytelling, because I don’t think there are black and whites.”

However, beyond this one moment of reflection, this part of the playthrough was drudgery. Go here, fight the splicers. Go there, kill the big daddy. Collect dribs and drabs of supplies along the way.

And then there were the bees. I hated the bees.

Rather, I hated the endless queue of splicers ready to charge into the room every time I peeked inside one of the hives. It was the most auto-mechanical, “gamey” moment in BioShock so far. Meh.

Next up: An evening with Sander Cohen. This should be interesting. :)