I finished chapter three of BioShock. This is the part where you must confront and kill the grotesque and maniacal Dr. Steinman, presumably because he calls you ugly. That, and he insists on trying to kill you. He also has something you need, which in FPS-land pretty much guarantees him a toe-tag in any case.

But lets move on. Dr. Steinman is an offensive twit, a boorish distraction from the main event, because it’s in this chapter that the game first presents the player with the choice that is so quintessentially “BioShock”: Save the Little Sister, or murder her by harvesting her adam.

I chose to save her. I’ve saved all the Little Sisters every time I’ve played. I personally can’t imagine playing any other way. Morbid curiosity aside, I can’t fathom the depths of emotional detachment required for someone to regard the girl as nothing but a filthy sack of resources to be emptied out.

Which is why I was mildly freaked out after reading Clint Hocking’s post on BioShock and ludonarrative dissonance.

My freakout had nothing to do with Hocking’s invention of a phrase that sounded like it was plucked out of an obscure academic journal. On the contrary, I thought it was clear, precise, and useful. Nor was I reacting to his claims that one of my favorite games of all time was “broken”. Rather, I’m referring to this part:

“The game literally made me feel a cold detachment from the fate of the Little Sisters, who I assumed could not be saved (or even if they could, would suffer some worse fate at the hands of Tenenbaum). Harvesting them in pursuit of my own self-interest seems not only the best choice mechanically, but also the right choice.” (emphasis mine)

Really? ‘Cause, I gotta say, I didn’t get that at all. Like, not even a little.

Now, before I go on, I want to make something clear: My reaction to the preceding statement has nothing to do with Clint Hocking as a person. I’m not commenting on his character. I don’t know Mr. Hocking, but no doubt he’s a great guy. Fun at parties. Good with kids.

When I first read the above statement, there was a sharp quarter-second or so when my strong, personal reaction to the game’s events came into play. Emotion clouded my reasoning, and I was tempted for a brief moment to regard Mr. Hocking as being morally “confused”.

I didn’t let that fleeting, unthinking impression linger or take root. We all have moments where it’s best to pause, step back, set our emotions aside, and bring our intellect to bear. After all, we’re talking about fictitious events in a game. No rational person would evaluate actions in games on the same moral or ethical grounds as actions in the physical world. That would be silly.

At least, that’s what I like to think when it’s me playing, and I’m plowing through one wave of splicers after another. I’m not killing real people. My game-self is in no way a reflection of my real self. Except…

Well, except, it is a reflection of a sort. My game-self is distinct from what I think of as “me”, but I can’t pretend the two are completely disconnected. It was that very connection, that part of me projecting into the game, that prevented me from sacrificing the Little Sisters.

So where does that leave us? Should I feel contrite for murdering simulated people by the dozen? Or should we question the moral fiber of anyone who sacrifices the imaginary life of one fictitious little girl?

Why do we tolerate certain acts in games while rejecting others as immoral? What factors enhance or limit our moral engagement in a game? How is it that two people with nominally similar personal values (e.g., “murdering children is bad”) reach vastly different interpretations of the same in-game event?

First, it’s clear Clint Hocking and I interpreted BioShock differently on many levels, not just morally. I didn’t see the game as “an examination and criticism of Randian Objectivism” as he did. Neither did I interpret the game’s ludic contract as an objectivist mandate to “do what is best for me without consideration for others.”

I can only guess that Hocking is referring here to the fact that the game forces you to lay waste to nearly every living soul you encounter. But at no point was I beating the snot out of splicers because of some prescribed, philosophical ideal. My only thought was, “I WANT TO LIVE!” I was acting on the much baser instinct of self-preservation.

So by the time I faced that strangely altered little girl cowering in the corner, I didn’t feel the game had led me to choose one option or another. The decision was entirely my own, and I knew without a doubt what the “right” choice was.

But I also trust that Clint Hocking’s decision to harvest the girl, while surprising and offensive to me, was just as considered, and just as obviously “right” to him.

Back when I first wrote about this, I suggested the moral divide in our BioShock experiences might have something to do with the idea of “aesthetic distance”. This term refers to the figurative gap separating an observer from an aesthetic work such as a painting, a novel, or, in this case, a game. At great aesthetic distances, one experiences the aesthetic object in a passive, disinterested way. At a close aesthetic distance, the experience becomes personal, intimate, and affecting.

I originally wondered if Clint Hocking’s experience may have been less personal. I suspected he may have played the game at a greater aesthetic distance, and so was better able to adapt his approach to the game’s themes and philosophies. 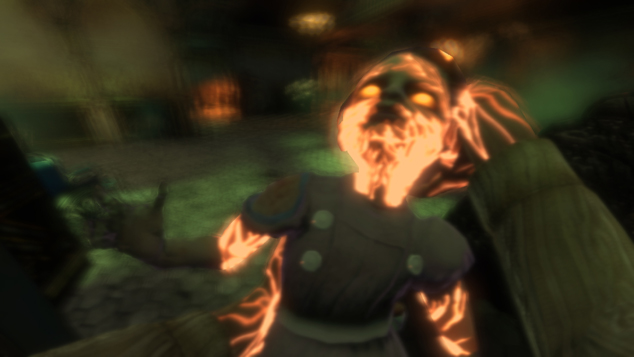 There are a few problems with this way of thinking. First, it’s purely descriptive, not causal. Simply stating that two people experienced something from different figurative distances does nothing to explain why there’s a gap in the first place.

Supposing for the sake of discussion that Mr. Hocking and I really did play BioShock at different aesthetic distances, what prompted that difference? Why did I supposedly play so “close” while he played from far away? A better model wouldn’t stop at describing the variation.

The notion of aesthetic distance also implies that anyone making moral decisions in games based on something other than their personal values must necessarily be less engaged in the overall experience. It suggests that you can’t immerse yourself in a game without applying real-world morals to every decision.

Finally, there’s the conspicuous fact that the notion of aesthetic distance utterly fails to account for my psychopathic rampage through Rapture. If I was playing at such a close aesthetic distance, if that was mostly “me” in the game, then how do I account for that one part where I beat a guy to death with a pipe wrench?

Because, just to be clear, even on my moodiest of moody days, that’s not my style.

Aesthetic distance fails here as a model of player-game interaction because it’s one-dimensional. It doesn’t allow you to feel two ways about a game. Either you’re up close and all-in, or you’re out in the cold, watching from a dispassionate distance.

That’s far too simplistic. We experience games in varied, complex ways. We might play one game as ourselves, while in another we take on the persona of the game’s avatar. Most often, I think it’s a mix of the two. The exact player/avatar proportion depend on many aspects of both the game and the player.

And that’s where I’ll wrap this up, at least for now. As many thoughts and ideas as I have on the subject, I’ve sat on this post far too long trying to untangle and articulate them. Better to save them for future posts.